With summer upon us (hopefully), we can relate to the following article–or can we ?? 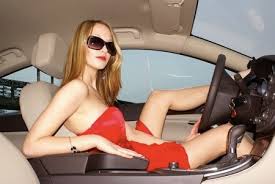 Celia Rivenbark – Driving and shaving not a very good combination

By now I’m sure that most of you have heard about the Florida woman who caused a two-vehicle wreck because she was shaving her bikini area while driving.

Guess that makes the time you drove with your elbows while eating a Whopper seem downright virtuous, doesn’t it?

Florida Highway Patrol troopers said the car Megan Barnes was driving crashed into the back of a pickup truck at about 45 mph. Her reaction time was slowed down because she was too busy grooming her hoohah to pay attention to the road. Oh, like that’s never happened to you?

Ms. Barnes told the investigating officer that she was on her way to a date and “wanted to be ready for the visit.”

Yes, she wanted to look her best. All over. Except, well, we’ve seen Ms. Barnes’ mug shot and she appears to have a face that would stop a clock and raise hell with small watches, bless her heart. To be blunt, I don’t think a perfectly groomed love rug could possibly make that much difference.

It could’ve been worse, I suppose. Ms. Barnes could’ve been waxing her bikini area as she drove along in her T-bird (Yes, fun, fun, fun til the po-lice took her T-bird awaaaaaayy) on those scenic bridges. Imagine the horror if she’d tossed the used wax strips out the window. The manatees might have tried to adopt them.

Not once have I been so bored that I decided I’d rather drag a sharp blade over my nether regions just to have something to do.

There are so many “You might be a redneck if” elements to the story of Megan Barnes, but my favorite is that, while performing this extremely personal grooming ritual, she asked her EX HUSBAND to steer the car so she could concentrate (“Help me out, Buford, I’m gonna make it look like a LIGHTNING BOLT!”)

What a guy! Not only did he hold the steering wheel so she could concentrate on primping for her big date with ANOTHER MAN, but when the cops arrived, he tried to switch places and claim he’d been driving.

Trouble was, he had burns on his chest from the airbag that had deployed on THE PASSENGER SIDE ONLY. Oops.

To no one’s particular surprise, the Highway Patrol quickly discovered that Ms. Barnes didn’t have a valid driver’s license. Oh, and, the day before, she’d been convicted of DUI and driving with a suspended license. Oh, and her car had been seized and had no insurance or registration. Oh, and she was on probation. Oh, and SHE’S A FLIPPIN’ LUNATIC!

Albeit an impeccably groomed one.